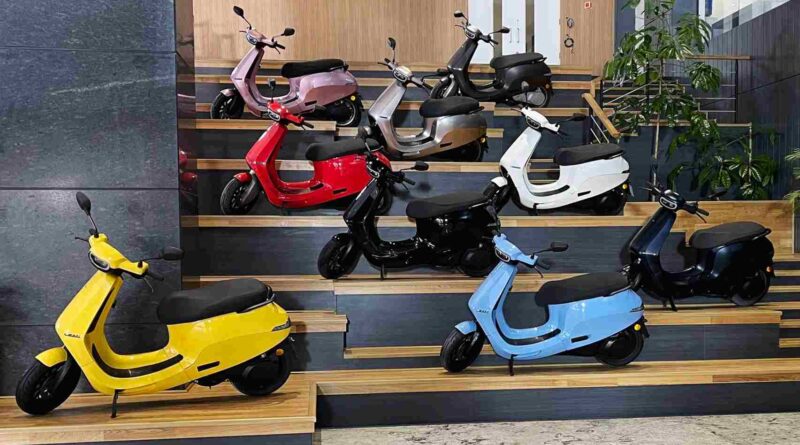 The ola s1 can boost from 0 to 40 kph in 3.6 seconds and 0 to 60 in 7 seconds, and the top speed is 90 kph the higher end ola s1 pro variant sprints from 0 to 40 in 3 seconds flat while 60 kph comes up in 5 seconds the claim top speed is 115 kph and all these figures are easily the highest of any made in India scooter petrol or electric. The torque of the motor shot for both variants is 58-newton meters and they have similar gradability at 12 degrees now.

The s1 gets two riding modes normal in sports, while the pro gets normal sports and hyper the ola s1 pro has a 3.97 Kilowatt Hour battery capacity and hence the range is a very large 181 kilometers this is likely to be an official arai figure but with a large battery industry-leading range is to be expected.

In case you were wondering, the battery cannot be removed.

The s1 pro’s claim range is much more than every other e-scooter on sale barring the simple energies simple one electric scooter that has a claimed range of 240 km despite the battery’s bigger size claim charging times are in the same ballpark as the competition using a portable 750 watt home charger. The s1 pro can be juiced up to full in 6 hours and 30 minutes the base ola s1 model gets a smaller 2.98-kilowatt battery and hence the claimed range drops to 121 kilometers. The s1 will take 4 hours and 48 minutes to charge with the home charger. Once the company’s fast charger network is established it claims that 18 minutes of charging can give you 75 kilometers of range. ola electric said that it will also set up one lakh charging stations across 400 cities in India as part of its hyper charger network as of today none of this exists but ola claimed that it will be the largest and densest electric two-wheeler charging network in the world. The charging infrastructure will be set up in a phased manner beginning with 5000 charging points across 100 cities in the first year.

s1 is available in 5 colors while the pro gets 5 additional color options. The ola scooter has some interesting features such as a proximity lock and unlocking a remote boot lock with a huge 36 liters of boot space TFT display inbuilt navigation and BlueTooth connectivity. There’s even an option for the scooter to produce various customizable sounds played via a set of in-built speakers but we’ll have to see how this works in Person. If you go for the top models you’ll also get hill hold and cruise control as well as reverse features. The display is customizable and also features built-in maps with real-time traffic assist to keep you updated about changing traffic conditions, on the topic of connectivity the ola app lets you set up individual profiles for your family. Other features on the app include live location tracking, remote battery, and health alerts and you can also book a doorstep service. The scooter can also be controlled using your voice. For instance, you can increase the volume of the track being played through the speakers using voice commands.

Ola had opened bookings on July 15 2021 for rupees 499. The scooter received over 1 lakh bookings within 24 hours, says ola. The ola s1 costs rs 99999 while the s1 pro will set you back by rupees 1.3 lakh. All prices are ex-showroom and include a fame 2 subsidy but they don’t account for various state subsidies. Now once you factor in the additional benefits from the various state subsidies the price will be even lower, with the government’s recent announcement that EV’s will not be charged road tax the base ola electric scooter could end up costing less than the likes of even the Honda Activa 125 on road. Here’s what some prices look like after state subsidies now. The scooter can be purchased from 8th September onward and deliveries begin in October in more than 1000 Cities. Ola plans to deliver the scooters straight to buyer’s homes across India instead of using a conventional dealer Network.