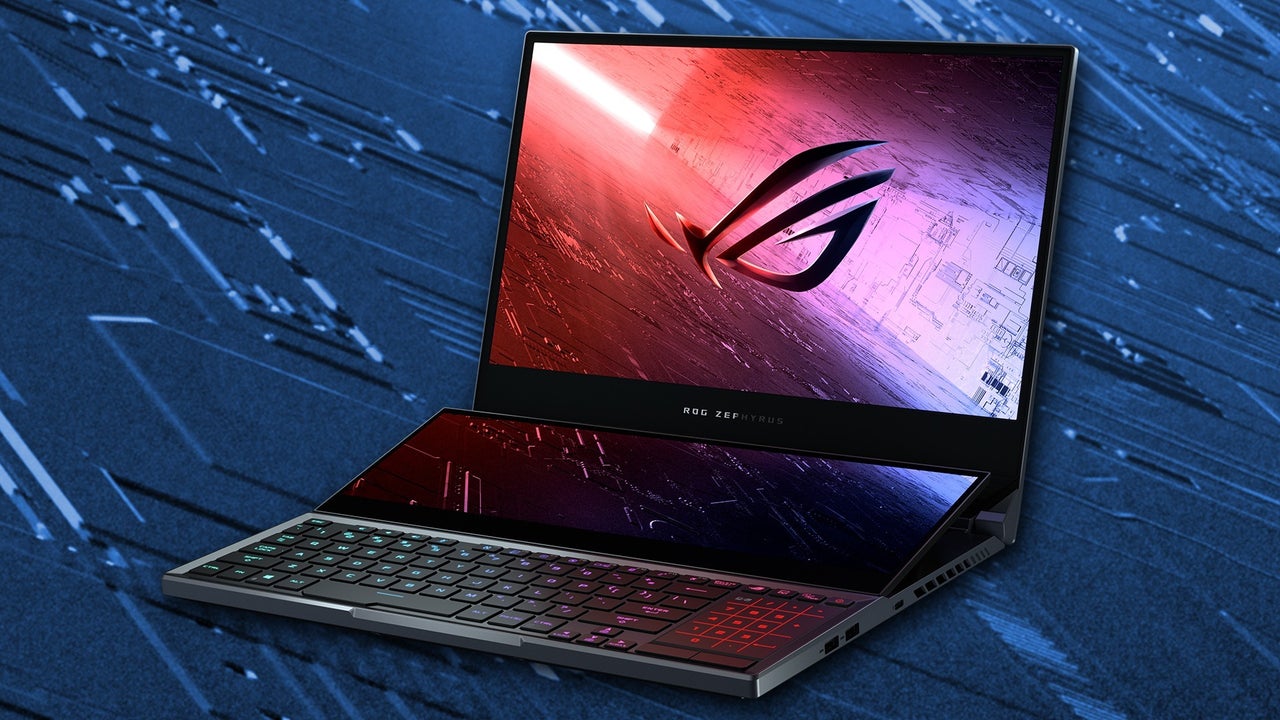 Games Network
April 2, 2020 Puneet 0 Comments
Asus has revealed its latest ultra-powerful gaming laptop, but this one is a little more interesting than just a folding PC with a beefy graphics card in it. The ROG Zephyrus Duo 15 is a dual-screen laptop, designed to give both gamers and creators more screen real estate in a portable package.The Zephyrus Duo 15’s approach to dual screen is a neat party trick; as you lift the laptop’s lid, a slim second screen rises up above the keyboard, with its final resting spot sitting at a shallow angle above the top row of keys and below the ‘chin’ of the main display.This non-glare 14.09” screen – dubbed the ROG ScreenPad+ – is UHD resolution (3840×1100) at 60hz, with touch and stylus support. It’s not as tall as the main monitor panel, and so sort of works as a miniature ultrawide. The narrowness of the screen means this second panel is best suited to tools such as the Photoshop colour wheel or OBS, rather than playing games on.

While Windows recognises the ScreenPad+ as a second monitor and you can drag items to it as you’d expect, the touch panel also has its own software. This allows you to assign various apps or windows to it and create presets, with up to three windows open across the width of it. During a hands-on session I played the Quake RTX demo while also having Steam and a browser displaying IGN open on the second screen. This is a simple way of showing its base capabilities, but it’s easy to imagine playing Escape from Tarkov and having an all-important map open in one panel of the second screen, and Discord in another.

Aside from its obvious uses for creatives reliant on Adobe software – Asus is partnering with Adobe and other companies to create specific content for the ScreenPad – the laptop could be useful for streamers on the go. Being able to broadcast from a laptop that offers a dedicated screen to monitor chat and provide touch-pad streaming tools seems quite useful.

The main display is a 15.6” panel available in two variants; a UHD 60Hz Adobe, Pantone Color Calibrated option, or a 1080p version that runs at 300Hz with 3ms response time. The former is suited to creative work, while the speed of the latter is designed for game performance.

Talking of performance, the Zephyrus Duo 15 is powered by an Intel 10th generation CPU – either an i7 or an i9 – and Nvidia’s RTX series of graphics cards, with a choice of the 2070 Super or the 2080 Super. As for memory and storage, you can opt for up to 32GB of RAM and 2TB of NVMe SSD storage in RAID 0.

Additionally, the laptop comes with a 90Wh battery that can be powered through the Thunderbolt port, and a liquid metal thermal compound on the CPU allows for an apparently 10% performance increase. The lifting action of the second screen also opens up an additional air intake to aid in further cooling of the components.

If this isn’t the desktop replacement for you, check our our suggestions of the best gaming laptops.